The best-priced NUC isn't from Intel. The GMK NucBox 2 offers stellar value, good performance, and for almost half that of its competition.

Looking for a low-power, mini PC for your living room or bedroom? The $380- $430 GMK NucBox 2 offers a compelling low-cost alternative to Intel's pricier NUC PC. While the NucBox 2 won't run Triple-A games with fluency, it's the cheapest way to get 4K HDR videos.

Who is GMK Tec?

I've dissected two of their machines so far and their electronics show good design. You can find their products under various names, on AliExpress. However, unlike most white label products, I couldn't find any computer identical to the NucBox 2 that sold for less. In fact, the cheapest place you can buy one is on Amazon. That almost certainly means GMK is the manufacturer.

Competition Among NUCs (And What's a NUC?)

A Next Unit of Computing (NUC) PC is a small computer with a laptop processor and modular RAM and storage. Their small form factor makes a NUC great for home theater and low-end gaming. However, because their small size means no room for graphics cards, they are not ideal for serious gaming.

The main competition is the official Next Unit of Computer (NUC) computers. Perhaps the closest example is the Intel NUC NUC8I5BEK, which has the same processor and similar components. However, there's also a Beelink Mini PC with similar hardware. However, the GMK NucBox 2 is almost half as expensive as its competitors while offering similar components.

The NucBox 2 uses a simple plastic, two-shell design with a single, double-sided circuit board. The hardware is good, with the exception being its use of the older Bluetooth 4.2. Its RAM is mounted as a single stick. That means dual-channel mode isn't enabled by default and you will have to add another stick to get dual-channel memory mode working.

On the downside, there are a few missing ports that you'd otherwise find on an Intel NUC. Although there is a USB-C port, it's not a Thunderbolt 3 port. So if you need lightning-fast data transfers, you're better off with a NUC. There's also a lack of a DisplayPort port.

The most interesting thing about this system is its processor, along with its integrated graphics.

The Intel Core i5-8259U is a bit older, having been released in 2018. It's based on Intel's "14+" nm technology node and supports modern instruction sets, like AVX. It was released at a time when Intel struggled to build faster processors. To compensate, Intel increased some processors' power consumption (TDP). While mobile processors often use 15 watts, the i5-8259U eats almost double that: 28 watts. As such, it's faster than a 15-watt computer but is less energy efficient.

The Iris Plus 655 graphics processor is Intel's 9th generation GPU design. However, it's a bit older and doesn't use Intel's latest Xe architecture. Even so, for the money, it's a solid performer for lightweight gaming and streaming HDR 4K video at 60Hz. It can also push enough pixels around to run video on two monitors.

But the most interesting thing about it is that it has a feature called "eDRAM".

Iris Plus has eDRAM

If you open a website, your computer has to download and store a mixture of code and graphics. If it stores or writes this data to a slow storage device, like a hard disc drive, the web page loads slowly. However, if it loads this to a fast temporary storage device, like RAM, it'll load faster. We call this storage scheme "caching".

But there's something even faster than RAM. And that's the memory onboard your CPU or graphics processor.

Iris Plus graphics processors lack raw power, but they have something called eDRAM. eDRAM is RAM that's integrated into a graphics processor. Because the RAM sits inside the processor, it offers faster performance than conventional RAM.

The NucBox 2 is a great HDR streaming machine but a weak gaming PC.

As mentioned earlier, the NucBox 2 isn't a gaming machine by any means. But despite its lack of gaming chops, it can play many older games at 1080p resolution. Rocket League, for example, runs at a fluid and seamless pace, as you would expect. However, games with lots of particle effects won't run at all. If you want a gaming machine on a budget, I would advise buying a larger system that can accommodate a discrete card as a future upgrade.

The Intel Iris Plus 655 is a strong media center graphics processor. While not exactly state-of-the-art in HTPC tech, it supports modern media codecs, like H.265 and VP9. In other words, it's good for streaming video over the internet.

For a NUC-sized computer, the NucBox 2 has good drive performance owing to its Netac S930E8 SSD and PCIe 3.0. While it's a budget drive, the Netac SSD supports the NVMe protocol, meaning it's significantly faster than SATA-interface SSDs. The Netac drive appears to possess a Phison PS5008-E8T controller, which doesn't include DRAM. More importantly, that means it uses the Host Memory Buffer (HMB) configuration that many low-end SSDs use.

Even so, while it's not a performance beast by any means, it has good performance for a budget mini PC.

BrowerBench.org runs three tests, all measuring webpage load times. The NucBox 2 scores are within the range that you would expect for a laptop-class processor.

Websites load quickly and without much stutter or lag. However, the benchmark MotionMark failed to generate a score.

The NucBox 2 gets good energy efficiency, given that it uses a laptop-class processor. However, it's on the higher end of wattage consumption of around 28 watts. I had some concerns that the processor might not offer many advantages in power efficiency over lower-wattage NUC-boxes. However, that didn't prove to be the case. In operation, the NucBox 2 offers virtually the same power consumption as smaller computers, like the ECS Liva Q3 Plus.

When turned off, the NucBox 2 uses 0.4 to 0.5 watts. At 10 cents per kilowatt-hour, that means you'd pay about a half-dollar per year in energy costs (for it to be turned off).

Even under punishing workloads, the NucBox 2's processor never drops below 2.5 GHz. Its temperature stays around 75C, even after an hour of torture testing. The fan is highly effective.

Even after blasting the NucBox 2 with artificial workloads, its fan never hits the loudness of an Intel NUC. It appears that GMK took great pains to make the fan as quiet as possible while preserving performance. You can see in the teardown that they used a large spring-tensioned copper heat sink combined with a fairly large fan. For this reason, the NucBox 2 cooling system compares favorably with most small form factor computers. Its cooling system seems about equal to the Minisforum U850 mini PC, which was similarly low noise and high efficacy.

At its highest speed, the fan produces 45 dBm of noise. In other words, it's moderately loud. You can definitely hear it if the room is quiet enough.

However, while streaming 4K videos at 60Hz, the volume never reached higher than a whisper. With background noise at 41 dBm, the NucBox 2's fan produced 42 dBm of noise. Hardly even a whisper. The low volume handily beats all competitors that I've tested.

The NucBox 2 is easy to repair, offers modular components, and comes with a year-long warranty, but you pay ship-in costs.

Like most NUC-style computers, the NucBox 2 tears down in a snap. However, it's by no means a Minisforum U850, with a one-click teardown option. Instead, you've got to unscrew four screws hidden beneath rubber feet. Once you've removed those screws, the rest of the computer is easy to access.

One more thing: GMK chose to use heat spreaders on both the RAM and the SSD. This configuration improves cooling performance and reliability. 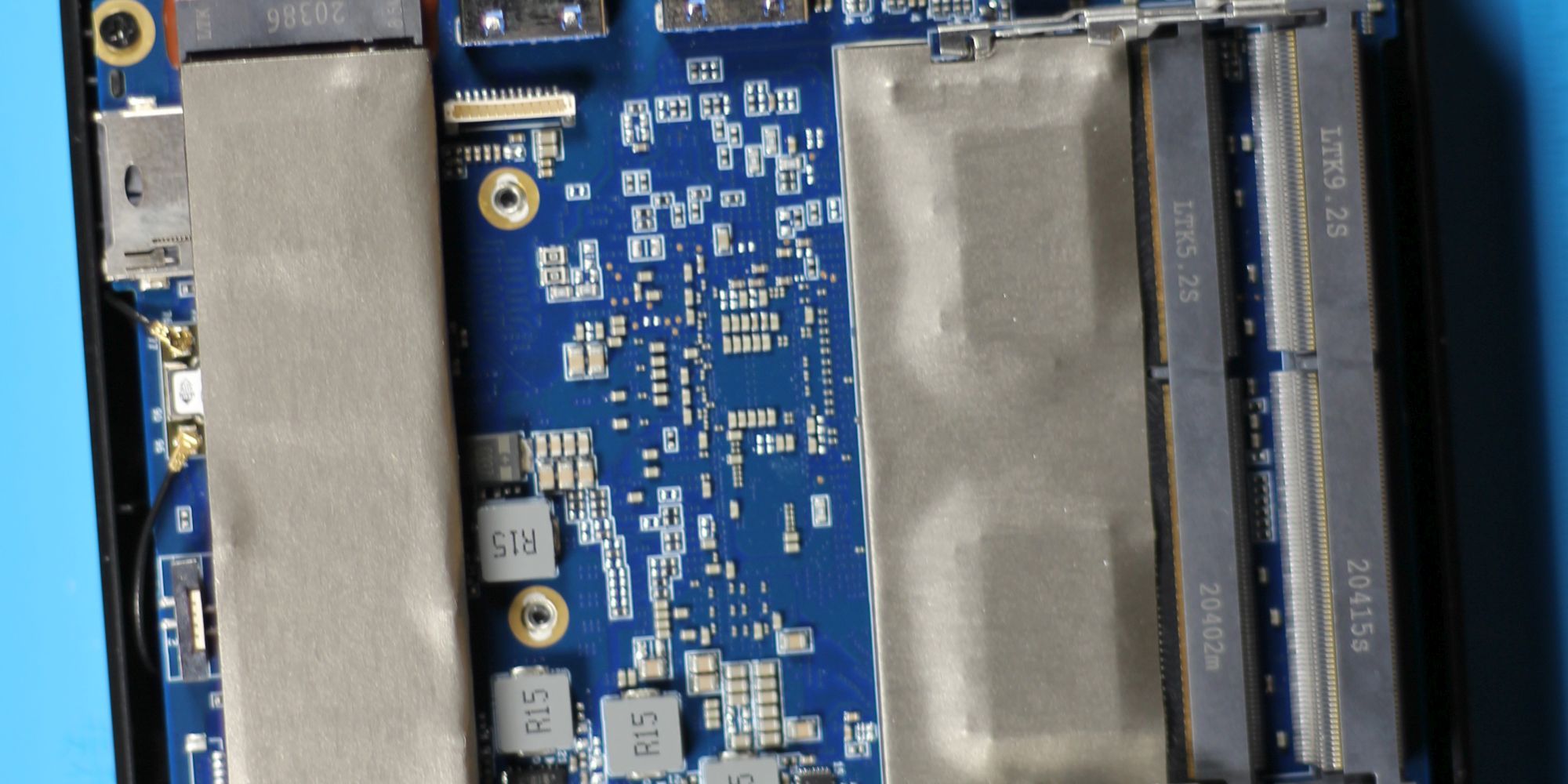 Like the Intel NUC, the NucBox 2 includes replaceable RAM. To improve upgradeability, GMK used a single stick of 8 GB DDR4 SO-DIMM RAM. That frees up an extra slot for a second stick. While this configuration disables dual-channel mode, it allows for users to add another stick of RAM in the future.

In addition to an M.2 port, there's also an empty slot for adding a 2.5-inch drive.

On a special note, I need to note that the NucBox 2 is well engineered. One interesting thing is that GMK didn't use a steel midrange, which NUC mini PCs use to separate the storage drive from the mainboard.

Unfortunately, all the USB ports on the NucBox are USB 3.0. There's a little known bug in the USB 3.0 design which turns all cables and peripherals plugged into it into a wireless antenna. That normally wouldn't be bad except that those cable-antennas, by coincidence, broadcast at the same frequency as Bluetooth and wireless mice and keyboards.

The bug is more or less a problem on all devices that use the 2.4GHz spectrum. The closer the device gets to the cable or peripheral, the worse its performance. In the case of the NucBox 2, all wireless mice and keyboards suffer from reduced range and laggy input. The leg isn't so bad as to make the devices unusable, but bad enough to feel distracting.

No Thunderbolt 3 or DisplayPort

If you need a Thunderbolt 3 port or a DisplayPort port, look elsewhere.

Should You Buy the GMK NucBox 2?

The GMK NucBox 2 is the cheapest way to get 4K HDR on a Windows 10 computer. It would make for an excellent home theater computer, but it has one issue: wireless interference from its USB 3.0 ports means you'll have problems using it with wireless peripherals.

The fact that it's the lowest-priced Windows 10 computer that can stream 4K video with HDR turned on is no small matter. Unfortunately, neither is the USB 3.0 interference bug. As such, the GMK NucBox 2 offers great value but only for those who use it with wired peripherals.

MyFirst Insta Wi Review: The Best Camera for Kids—and It Prints Labels, Too

Become a Brilliant Learner With This Online Learning Platform

Protect Your Gadgets With These Great OtterBox Deals

Automate Your Chores With This Samsung Jet Bot Vacuum Deal

Get Crafty: Save $150 on the Cricut Maker